Showing notifications to users on UI

I am building app in which I want to notify users in some way(on UI) when user is currently on different screen than the app screen. How can this be achieved ?

Are you wanting to send push notifications from your app server to your app iframe? If so, you can use long polling or web sockets for this. If the trigger of the app event is a UI action in an app iframe, then you will need to make an API call from that app iframe to your server so that the server can subsequently push the events to the app iframes.

Nope that’s not what I want to do, I need a way to notify user even when user is not in an app context. While thinking over this I realized to do something like this I would need a javascript which is basically available on most of JIRA pages. I am not sure if that’s something which is possible or something even being planned.

@VishwajeetSingh - we had a similar need. In our case, we allow Jira admins to generate announcements for their users, and we needed a location like atl.general which exists in Confluence Cloud, but does not exist in Jira cloud.

We created https://ecosystem.atlassian.net/browse/ACJIRA-1640 for this about 2 years ago, but so far it has been ignored.

@ademoss Yes it’s funny that everything has to happen on your apps screen, you can’t notify user of any changes which may have happened while he was not on that screen. I do understand limitations of cloud as a platform but than many use cases defintely need a way to bring user back to their screen. Even if there’s an option to add to notification which JIRA already shows with bell icon using some background script it would be helpful.

I don’t see any option to vote to the ticket which you have shared. Lets hope we are able to get some traction on that.

@dmorrow Hope we are now clear on use case and expectations, I hope you will be able to take to engineering team and get their quick feedback on the same.

@dmorrow is there a reason, why notifications sub-system was not utilized for this yet? 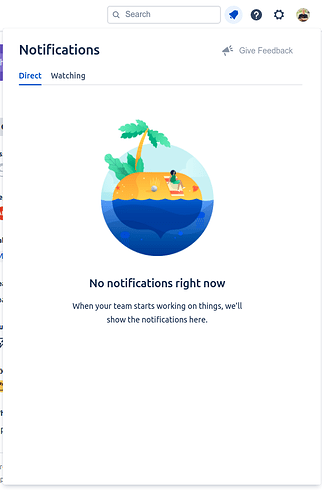 As an alternative many app vendors are forced to use workarounds, which are not great neither from UX or implementation perspective. I mean using end-user emails, or other methods of communicating with them.
I know at least one app from marketplace which is basically adding comments to issues to notify users about something related to their app.