Hello,
I have noticed several problems with creating a Validator with Forge.
I created a custom plugin that creates a validator and I have set the validator in several transitions in the workflow.

After that, we decided to uninstall it for some reason, but yet I see the validator in the possible list of choices.
After that, I install it again in a new version.
Now I see two different, yet identical, validators in the list! 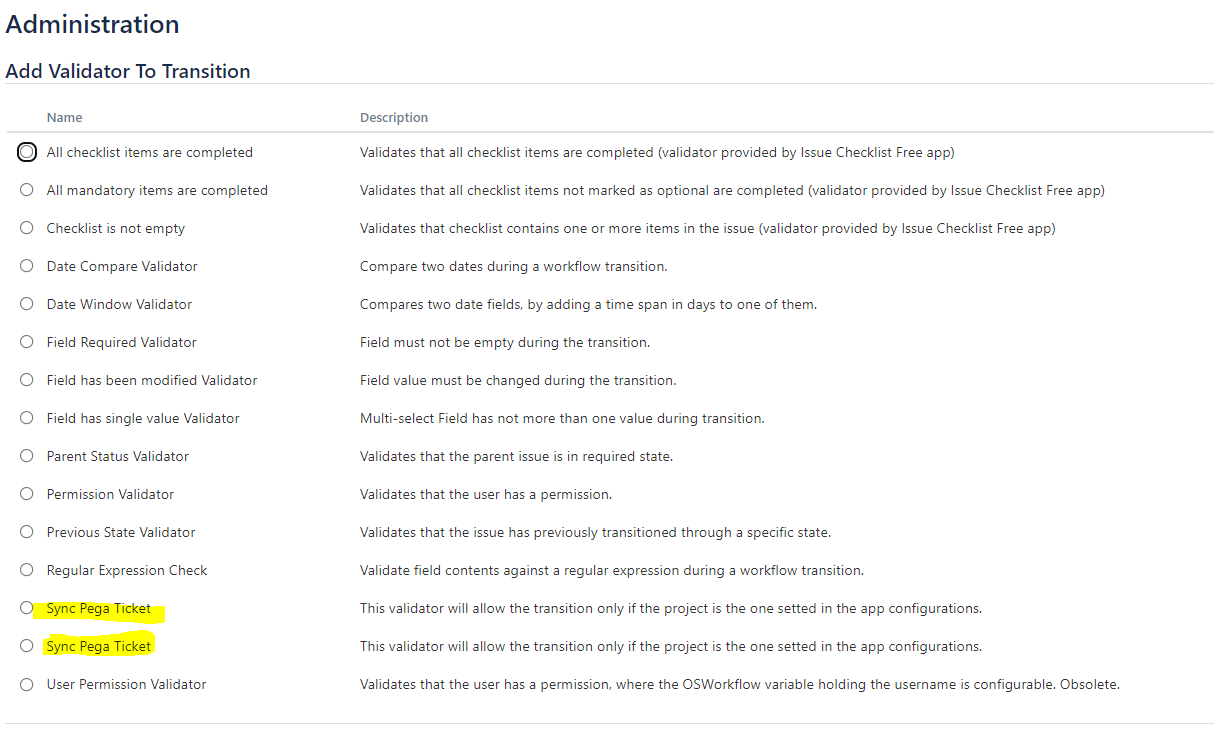 We have changed, in the workflow, the validator “link” with the new one, but from time to time we get the error: Transition failed because we couldn’t invoke validator:

The problem disappears if we trigger the transition a second time.

This is not a dev problem, because we are sure that we have used the correct validator link and (when it is invoked) it’s working perfectly.
Seems like Jira is somehow caching the old (and uninstalled) validator and sometimes mixing the references between the two of them.

Can someone help me with this?

This sounds like a bug in Forge. Would you be able to create a bug in the Forge project please.

Hi @dmorrow,
sorry for the late reply, I was trying to resolve this issue with the support, but no luck yet.

I’m not sure I understood what you’re asking.
Do you mean if I can create a Forge plugin that replicates the bug?

I really didn’t do anything very strange.
I just created a simple validator that is doing some rest call in and out Jira.

I notice that the problem appeared when I uninstalled and reinstalled the same plugin in the same environment.
My guess is that there is something cached in the workflow (like an old pointing) that sometimes mix the things up.

I’m thinking this because I’ve tried also to create a completely new plugin (clone of the old one) and set it to the workflow.
Even with this, sometimes the transitions are returning the error.

I’m excluding that it’s a plugin bug because (usually) it’s enough to retry the transition to make everything work properly.

Do you have some suggestions?

ps: I can’t change the workflow

My understanding is that you have created a Forge app (we use the term app rather than plugin) which isn’t behaving as expected. From what you described, it sounds like a bug in Forge, so I suggested you should create a bug in the public Forge Jira project for the Forge team to address. When you file the bug, it would be useful to the team if you could include relevant snippets of your app such as the manifest and the code that handles the workflow transitions.