I faced a problem that may be a bug in how Forge handles tabs added under Space Settings in Confluence Cloud. I tried to define 2 tabs under confluence:spaceSettings in my manifest.yml:

I see both of my menu items in the Integrations box under Space Settings (see first screenshot below). But when I click any of them, the tab container that opens up displays both tabs as selected and I’m not able to switch between them, I can only see the tab panel of the first tab (second screenshot). Chrome DevTools shows that the DOM ids of the tab selector elements are the same for both tabs (third screenshot). It works well with 1 tab but not with 2.

Either the two tabs should work as one would expect or I should not be able to add 2 tabs under confluence:spaceSettings at all (I’d expect the validation of my manifest.yml to fail). This looks like a bug. Has anyone else encountered the same problem? 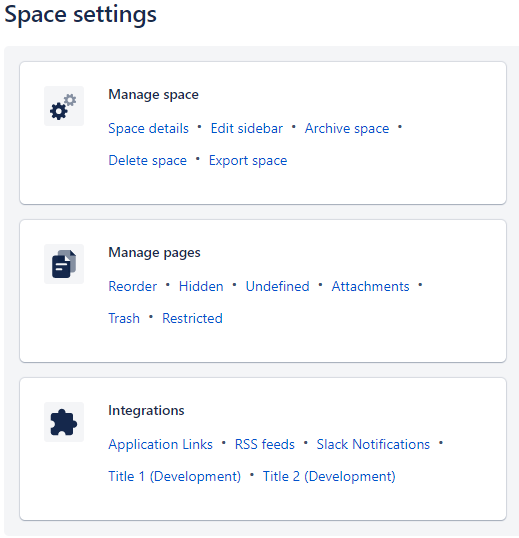 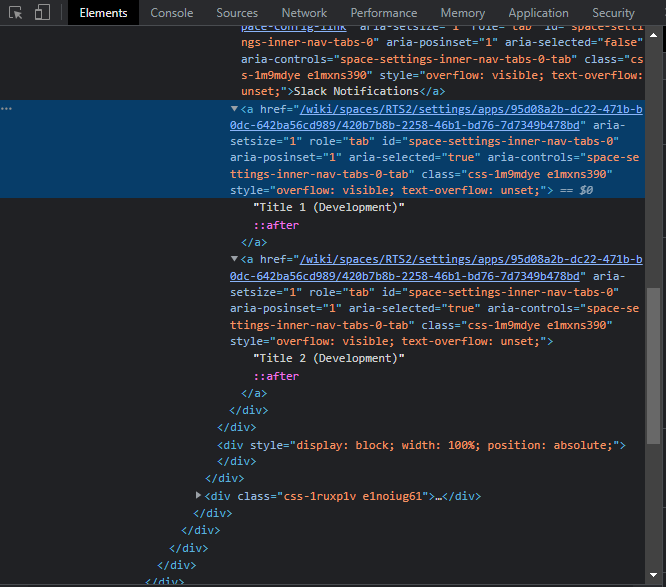 Hello @atlassianadmin, has this been resolved in the meanwhile?

Another problem I noticed is that I’m able to install two apps that define Space Settings modules with the same name. These show up identically with no distinction whatsoever. Will this change later?

Let me clarify our problem and how we think it should be resolved by giving you an example.

What we see now under Space Settings:

a. There would be no confusion caused by identical module titles of different apps (if both apps define “Statistics” for example, it would be confusing in the same box but not in separate ones)
b. The tab container would not grow too large if it only contained tabs for one app at a time

Hi @GaborDicsoMidori, thanks for your input.

I see a similar request in another thread. Make sure to include all your suggestions in the feature request ticket, so we can gather impact and interest, and prioritize it accordantly.

Regarding a bug: It was fixed. Now you can define a route param (in a similar way as for other modules) to differentiate different modules in the same app. See module description. Hope this helps. And sorry for the late notice (We should have mentioned this earlier).

Thank you for your response. I created a ticket 2 days ago related to this topic: [CONFCLOUD-74192] Defining two tabs under Space Settings: conflict with other apps, no custom ordering - Create and track feature requests for Atlassian products.

Please note that I created two distinct topics recently that are similar but not the same. One is for Global Settings, the other (this one) is for Space Settings. I also created tickets for both.

Regarding the bugfix: thank you for the information, I’ll take a look at it soon.